Book Sketch: Dating You, Hating You by Christina Lauren 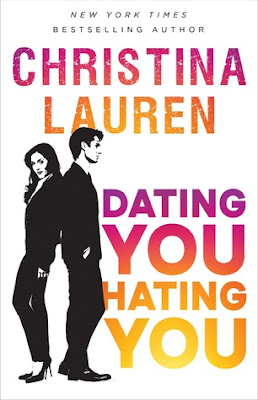 Despite the odds against them from an embarrassing meet-awkward at a mutual friend’s Halloween party, Carter and Evie immediately hit it off. Even the realization that they’re both high-powered agents at competing firms in Hollywood isn’t enough to squash the fire.

But when their two agencies merge—causing the pair to vie for the same position—all bets are off. What could have been a beautiful, blossoming romance turns into an all-out war of sabotage. Carter and Evie are both thirtysomething professionals—so why can’t they act like it?

Can Carter stop trying to please everyone and see how their mutual boss is really playing the game? Can Evie put aside her competitive nature long enough to figure out what she really wants in life? Can their actor clients just be something close to human? Whether these two Hollywood love/hatebirds get the storybook Hollywood ending or just a dramedy of epic proportions, you will get to enjoy Christina Lauren’s heartfelt, raucous, and hilarious romance style at its finest.

I’ve heard for a while that Christina Lauren books are popular, but I’ve never had a chance to read one before. This book lived up to its promises—fun, fast-paced, and more than a little flirty.

Evelyn Abbey is a top-notch talent agent in Hollywood. She loves her job, and she is good at it, too—so good, in fact, that she has never really had time for a relationship. But all that changes when a friend sets her up at a party. Finally, she’s found someone she can see herself with—at least, until he’s suddenly her competition at work. Will sabotage drive them apart? Or will they figure out how to mix business with pleasure?

I love the fact that New Adult is a growing genre. As a thirtysomething professional who has never been married, it’s nice to have stories I can relate to. Evie is the kind of adult I want to be—confident, competent, with a good group of friends behind her, and happy with the way her life is going. I loved that she wasn’t afraid to work hard to be the best, especially in a male-dominated field. Enter Carter, who is in many ways the perfect match for Evie. He understands her work and respects how capable she is. He is also ambitious, but he hasn’t been corrupted by Hollywood, at least not yet. He’s the kind of guy that we all hope is still out there for us.

In terms of chemistry, Evie and Carter definitely have it. Both their competitive tension and their romantic tension are easily felt. I loved seeing what they came up with as the competition went on, but I was also rooting for them to find their way back to each other. Told in dual POVs, I felt that I got to know both characters very well. It was fun to see their banter as well as how they both reacted to tough situations, not to mention seeing the practical jokes they devised. This book also has a dash of intrigue and mystery woven throughout the story

Admittedly, this book did not have quite as much romance as I was expecting. In terms of language for the romance scenes, the descriptions fell short of other scenes I have read. And at times, I just wanted more of them and less of the work environment, but I can’t deny that it was fun to see a glimpse of Hollywood politics. Still, the book was a quick read that kept me interested from start to finish.

Most Memorable Aspect: Seeing the ins and outs of behind-the-scenes Hollywood.

Snapshot Review: If you are looking for a sassy romance with a flair for the dramatic, definitely add Dating You, Hating You to your t-read list. I will be picking up more books from Christina Lauren!