With Omega Point destroyed, Juliette doesn’t know if the rebels, her friends, or even Adam are alive. But that won’t keep her from trying to take down The Reestablishment once and for all. Now she must rely on Warner, the handsome commander of Sector 45. The one person she never thought she could trust. The same person who saved her life. He promises to help Juliette master her powers and save their dying world . . . but that’s not all he wants with her.

The Shatter Me series is perfect for fans who crave action-packed young adult novels with tantalizing romance like Divergent by Veronica Roth, The Hunger Games by Suzanne Collins, and Legend by Marie Lu. Tahereh Mafi has created a captivating and original story that combines the best of dystopian and paranormal, and was praised by Publishers Weekly as “a gripping read from an author who’s not afraid to take risks.” Now this final book brings the series to a shocking and satisfying end.

First Thought After Finishing: Tahereh Mafi has such a way with words. And characters. And did I mention words?

From the very first page of this trilogy, I have been hooked on the story. I can still remember all of the hype over the first book, and it was definitely there for a reason. After such a powerful second book, it would have been easy for this third book to fall flat, but it doesn’t. Instead, Tahereh Mafi surpasses herself and delivers an epic conclusion.


“I had been shackled, a prisoner in my own mind. But finally, finally, I have learned to break free…I am no longer afraid of fear, and I will not let it rule me. Fear will learn to fear me.”

Ignite Me starts just after the terrifying events of Unravel Me. Juliette may have been disoriented and believed her group to be defeated, but with the help of Warner, she soon discovers just how much work is left to be done and just how far she will have to push herself. With the help of a few favorite people, Juliette grows (by leaps and bounds) to become the heroine she never imagined she could be.


“And we are quotation marks, inverted and upside down, clinging to one another at the end of this life sentence. Trapped by lives we did not choose.”

Holy action and character development, Batman! This book has no shortage of either. Juliette, Warner, and Adam are put to test after test in this book—emotionally moreso than physically. I admired the way Juliette came to embrace her true nature and assert herself in the role she deserved. And Warner…are there even enough words to describe Warner? “Book boyfriend” and “More, please!” come to mind. I loved him in the last book (Chapter 62, anyone?) and I love him even more here. That probably makes it no surprise that I am not a huge fan of Adam. Honestly, I wanted to reach into the pages and smack sense into him. His petulance and reticence to recognize something bigger than himself annoyed me.

Fortunately, everyone else in the book made up for Adam’s defects. Kenji was as amusing as ever. He’s still the kind of guy BFF that every girl wants to have, and I would have loved to see him on the page more. And amidst all of the action—there are major battle preparations underway here—sparks are definitely flying. It’s no surprise why this book is called Ignite Me—the chemistry sizzles off the page and fuels the book.


“It’s the kind of kiss that inspires stars to climb into the sky and light up the world. The kind that takes forever and no time at all. His hands are holding my cheeks, and he pulls back just to look me in the eye and his chest is heaving as he says, ‘I think,’ he says, ‘my heart is going to explode,’ and I wish, more than ever, that I knew how to capture moments like these and revisit them forever. Because this. This is everything.”

Throughout this trilogy, the development of plot and characters, the tension and urgency, and the need to read “just one more page” (even in the wee hours of the morning…the night before a meeting…) never abate. It’s a testament to the characters and the author when love for a story can stay strong across years and even after the story’s conclusion, and that is exactly what happened here. Tahereh will also have more books in this world coming in the future, and I absolutely can’t wait to read more from her!

Most Memorable Aspect: Mafi’s writing style. She shows us the thoughts and emotions of her main character with a grace and brilliance few other writers achieve. Oh, and Warner. (Duh!) 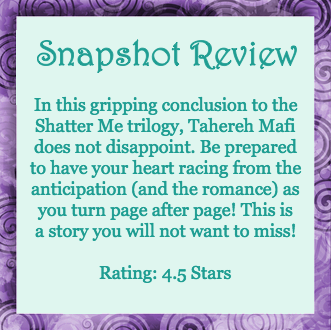