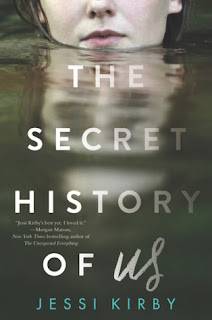 THE SECRET HISTORY OF US
By: Jessi Kirby
Published By: HarperTeen
Release Date: August 1, 2017
Preorder the Book: Amazon

Goodreads Summary: Gorgeously written and emotionally charged, The Secret History of Us explores the difficult journey of a teenage girl who must piece her life together after losing her memory in a near-fatal accident.

When Olivia awakes in a hospital bed following a car accident that almost took her life, she can’t remember the details about how she got there. She figures the fog is just a symptom of being in a week-long coma, but as time goes on, she realizes she’s lost more than just the last several days of her life—she’s lost her memory of the last four years. Gone is any recollection of starting or graduating high school; the prom; or her steady boyfriend Matt. Trying to figure out who she is feels impossible when everyone keeps telling her who she was.

As Liv tries to block out what her family and friends say about who she used to be, the one person she hasn’t heard enough from is Walker, the guy who saved her the night her car was knocked off that bridge into the bay below. Walker is the hardened boy who’s been keeping his distance—and the only person Olivia inexplicably feels herself with. With her feelings growing for Walker, tensions rising with Matt, and secrets she can’t help but feel are being kept from her, Olivia must find her place in a life she doesn’t remember living.

Why it's Wanted:
It's Jessi Kirby! She's one of the authors on my autobuy list. Admittedly, there are several YA books that deal with comas and memory loss, but the way Jessi Kirby writes is enough to make me want to read this!