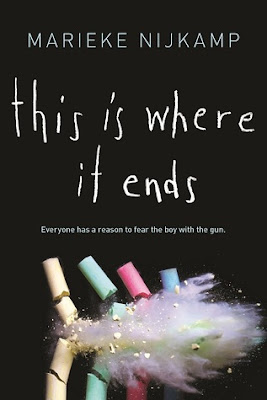 Goodreads Summary: 10:00 a.m. The principal of Opportunity High School finishes her speech, welcoming the entire student body to a new semester and encouraging them to excel and achieve.

10:02 a.m. The students get up to leave the auditorium for their next class.

Told from four different perspectives over the span of fifty-four harrowing minutes, terror reigns as one student’s calculated revenge turns into the ultimate game of survival.

First Thought After Finishing: I hope and pray that something like this never happens at the school where I teach, because it would be all too easy.

I've wanted to read this book for some time, but I didn't think it would be a good idea during the school year. Reading it during the summer didn't make it any less frightening--especially when horrors like this happen far too often--but at least there was some distance.

Nothing ever happens in Opportunity. For some, they can't wait to get out. Others are happy with the small town life. Most people know each other, know each family's secrets, and found their niche within the city. So when someone starts shooting students at Opportunity High, it seems unthinkable. Death seems imminent, and help seems unavailable. Told minute by minute from four different perspectives, this book gives an inside glance at this real-life nightmare.


"There are no words in that fleeting moment between hope and the knowledge. There is no way to express how a heart can burst and break at the same time, how the sun can cut through the darkness but will cast shadows everywhere."

What can I say about this book? It's terrifying in that it hits far too close to home. School shootings are far too prevalent, and it's far too easy for students to be pushed to a breaking point that brings them to that awful decision. The fear these students have is palpable through the pages. Yet there is far more than that. Fred Rogers tells the story that his mother told him, in the aftermath of destruction, to look for the helpers. And that is true in this book. Even those who were defenseless against a gun were willing to try and help, showing humanity in the face of inhumanity. Sometimes, that is all we have.

Even though this book is short and the story is told within hours, there is so much emotion and character development. I felt like I knew each of the four main people, and it shows just how complicated and tumultuous the lives of teens can be. Even in a small town, even when you have a perfect life plan, one instance or one person is all it takes to change everything. My heart broke again and again as more was revealed and more people suffered. Despite that, this is not a book you would ever think of putting down. There's an old saying I like: "Everything will be okay in the end. If it's not okay, it's not the end." I kept turning the pages hoping that this would be true once again. But real life is never wrapped up perfectly, and Marieke Nijkamp reflects that.

Most Memorable Aspect: This book feels too frighteningly real to ever forget. 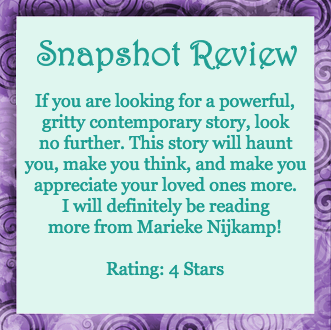