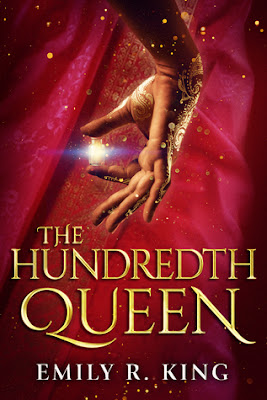 Goodreads Summary: As an orphan ward of the Sisterhood, eighteen-year-old Kalinda is destined for nothing more than a life of seclusion and prayer. Plagued by fevers, she’s an unlikely candidate for even a servant’s position, let alone a courtesan or wife. Her sole dream is to continue living in peace in the Sisterhood’s mountain temple.

But a visit from the tyrant Rajah Tarek disrupts Kalinda’s life. Within hours, she is ripped from the comfort of her home, set on a desert trek, and ordered to fight for her place among the rajah’s ninety-nine wives and numerous courtesans. Her only solace comes in the company of her guard, the stoic but kind Captain Deven Naik.

Faced with the danger of a tournament to the death—and her growing affection for Deven—Kalinda has only one hope for escape, and it lies in an arcane, forbidden power buried within her.

In Emily R. King’s thrilling fantasy debut, an orphan girl blossoms into a warrior, summoning courage and confidence in her fearless quest to upend tradition, overthrow an empire, and reclaim her life as her own.

First Thought After Finishing: Why didn’t I read this sooner?

It’s no secret that I love fantasy novels, but sometimes I miss books that need to be on my radar.  The Hundredth Queen was one of those, until it was scheduled for book club. After discovering it, I flew through this book and really enjoyed it!

Kalinda has spent her life as an orphan in a Sisterhood temple. She and her best friend Jaya plan to finish their training, take their vows, and live out the rest of their quiet lives there. But a visit from the Rajah for a Claiming disrupts their plans. Soon, Kalinda is thrown into an unpredictable life at a palace, where jealousy and conspiracies threaten any hope of stability and she will have to fight for her life. Only more is happening than the games of the women at court. When any wrong action might mean death, Kalinda will have to trust in her strength and herself if she is to survive.


"Anything can be changed by those who have the courage to blaze their own path."

From the synopsis, and even through a good portion of the book, The Hundredth Queen did read like many other fantasy novels. Kalinda’s Claiming, the male love interest who we meet early in the book and the romantic development, and even the tournament Kalinda must compete in all seem reminiscent of other storylines. However, Emily R. King brings many new facets to this genre.  She weaves strands of Sumerian mythology throughout the story, and learning about the myths kept me hooked. (This coming from me, who thought reading Edith Hamilton’s Mythology back in high school was a form of cruel and unusual punishment.) I also loved the ideals promoted in this book. Women were trained as warriors, not just men. In fact, the men prized their fighting abilities just as much as (if not more than) their beauty. Even though it may be at odds with the notions of a rajah maintaining wives and courtesans, women could still be respected.

This story is one of self-acceptance and empowerment. Kalinda must come to terms with who she is, learn who she can trust, and find a way to be powerful without relying on someone else. That is not to say that she is alone by any means. Kalinda has a guard captain named Deven by her side, and Deven is certainly someone that you would want by your side as well. And even amongst women whom she may have to fight, she comes to learn the value and power of friendship. Throw in a little magic, and you have a novel that anyone can enjoy, but that has the potential to be especially meaningful for teen girl readers.

Most Memorable Aspect: The Sumerian myths. I find myths from cultures beyond Greek and Roman very intriguing! 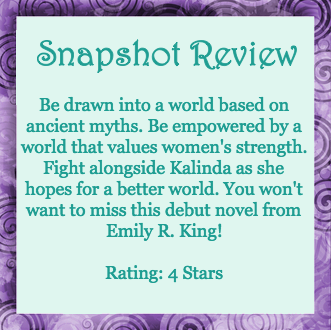