Blog Tour and Book Sketch: All the Bad Apples by Moira Fowley-Doyle 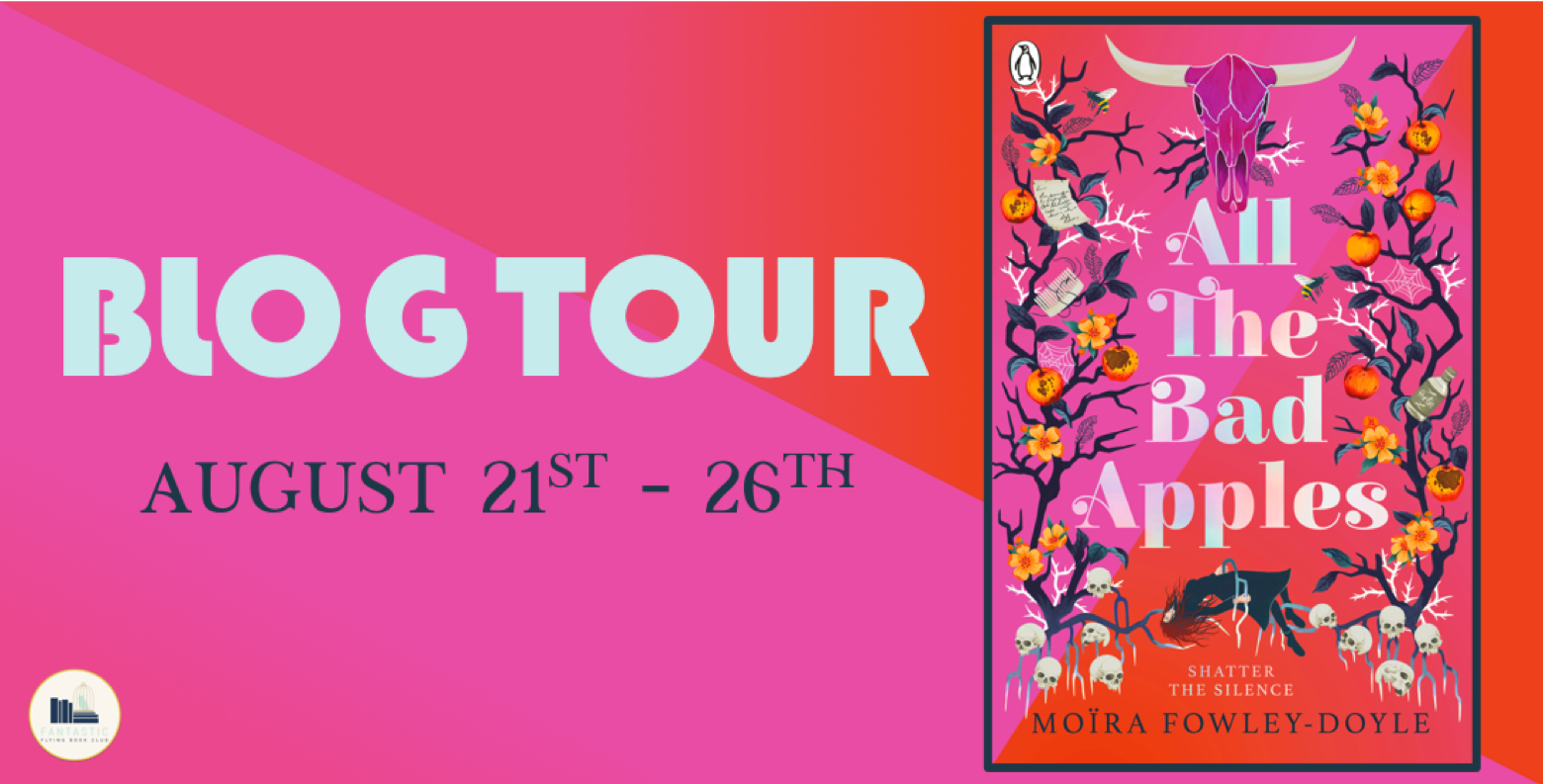 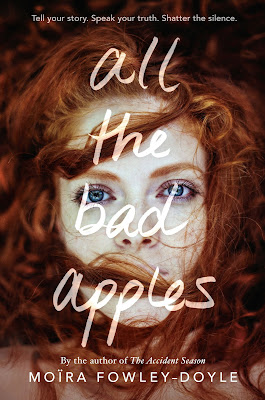 Goodreads Summary: The day after the funeral all our mourning clothes hung out on the line like sleeping bats. 'This will be really embarrassing,' I kept saying to my family, 'when she shows up at the door in a week or two.'

When Deena's wild and mysterious sister Mandy disappears - presumed dead - her family are heartbroken. But Mandy has always been troubled. It's just another bad thing to happen to Deena's family. Only Deena refuses to believe it's true.

And then the letters start arriving. Letters from Mandy, claiming that their family's blighted history is not just bad luck or bad decisions - but a curse, handed down through the generations. Mandy has gone in search of the curse's roots, and now Deena must find her. What they find will heal their family's rotten past - or rip it apart forever.

First Thought After Finishing: I can’t believe stories like these still happen for so many girls.

Irish history wrapped into a mystery? Yes please! But this story comes with so much more than a mystery infused with hints of magic. It’s a story of overcoming the past, of defying societal conventions and expectations, and of being proud of who you are.

Deena has been raised by her older sister to be a “nice, normal girl” so that she can escape the Rys family curse. It’s what her sister expects, it’s what her father expects, and it’s what she wants—except for when she’s with her other sister, Mandy. A wild enigma, Mandy offers Deena a glimpse into something that is more than a “nice, normal life.” Until the day that Mandy disappears, and everyone believes her to be dead—everyone except Deena. A letter that Mandy left behind sends Deena on a quest to discover the truth. Along with her best friend, she finds new people who also have a part in her history. But this is one story that doesn’t end the way that anyone was expecting.

From the beginning of this book, something felt just a bit unsettled, which made me dive right into the story to figure out what was going on. Mandy was an intriguing character, and Deena’s tenacious belief that Mandy was alive had me convinced as well. The story unfolded in alternating perspectives—the present, with Mandy’s letters, and flashbacks of the family history. The flashback scenes were both fascinating and horrifying, knowing that they were loosely based on reality. In many ways, they were like traffic accidents—hard to watch but impossible to look away from. In all honesty, the historical scenes were more compelling than the present tense, but piecing together the puzzle was so intriguing that I finished the book within a few hours.

The cast of characters was diverse and felt like a group that would be fun to hang out with. The adventure bound them all in a way that made them feel like they always belonged together. I especially liked Cale’s character. She was unapologetically herself in a way that was inspirational. It would be interesting to see a spinoff story involving her and Deena. The family members, on the other hand, often left a lot to be desired. Then again, that was probably the point.

This book inspired a lot of emotions, and not all of them were positive. But I am so glad that a book like this exists, because it should cause a reaction. Anyone reading this should want better for women and children all over the world. I can only hope that this book finds its way into the hands of people who need it—into the hands of anyone who has ever been considered a “bad apple.”

All the Bad Apples is the first book I’ve read by Moira Fowley-Doyle, but it won’t be the last. I can’t wait to see what adventure she creates and what emotions she inspires next.

Most Memorable Aspect: The haunting reality of the flashback scenes. 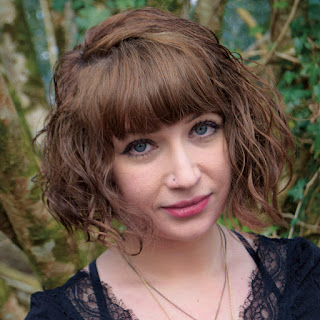 Moïra is half-French, half-Irish and lives in Dublin. Her first novel, The Accident Season, was shortlisted for the Waterstones Children's Book Prize and received widespread critical acclaim. Her second, Spellbook of the Lost and Found, was shortlisted for an Irish Book Award. 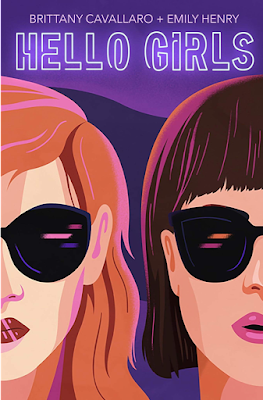 
Goodreads Summary: Best friends are forged by fire. For Winona Olsen and Lucille Pryce, that fire happened the night they met outside the police station—both deciding whether to turn their families in.

Winona has been starving for life in the seemingly perfect home that she shares with her seemingly perfect father, celebrity weatherman Stormy Olsen. No one knows that he locks the pantry door to control her eating and leaves bruises where no one can see them.

Lucille has been suffocating beneath the needs of her mother and her drug-dealing brother, wondering if there’s more out there for her than disappearing waitress tips and generations of barely getting by.

One harrowing night, Winona and Lucille realize they can’t wait until graduation to start their new lives. They need out. Now. All they need is three grand, fast. And really, a stolen convertible to take them from Michigan to Las Vegas can’t hurt.

First Thought After Finishing: I would love a book with more of Winona and Lucille’s adventures!

The synopsis of Hello Girls had definite Thelma and Louise vibes, and just like it promised, this book was a fun read. I kept turning page after page to see what shenanigans the girls would get themselves into next.

Winona Olsen has the perfect life—or so it seems. Nobody would guess what her life is actually like in her house or what her father acts like off-camera. Lucille Pryce is the opposite—nobody would ever envy her. Except possibly Winona. A chance meeting one night forged a friendship that could endure the worst life had to throw at them. But when they realize that they can’t wait until graduation to be free of their small town, they hatch a plan to get away—a plan so crazy enough, it might just work. What are a few felonies compared to a lifetime of freedom?

Hello Girls was a fast-paced whirlwind of adventure. Winona and Lucille were never without a plan for very long. Lucille is a quick-witted schemer who is completely devoted to her friendship with Winona. Despite everything, she was determined to make her life better, and I loved that about her. Winona was slower to open up, but her quiet strength eventually came through. The two friends were a great balance, and their friendship shone through in the story.

However, there was a certain amount of suspension of disbelief required in this book. Despite the initial fun of this adventure, there were definitely darker moments and morally questionable acts from all characters involved. The adult side of me couldn’t believe the things the girls got away with (both legally and in terms of their consciences). Everything didn’t go perfectly according to plan, but I couldn’t help thinking that the girls were rather lucky.

If you can get past the logistical problems, this book is a quick and entertaining read. If these authors have another collaboration, I’ll definitely check it out!

Most Memorable Aspect: The unwavering friendship between Winona and Lucille. 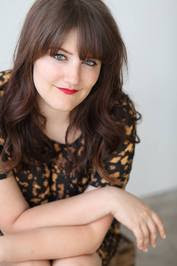 Brittany Cavallaro is a poet, fiction writer, and old school Sherlockian. She is the New York Times bestselling author of the Charlotte Holmes novels from HarperCollins/Katherine Tegen Books, including A STUDY IN CHARLOTTE, THE LAST OF AUGUST, and THE CASE FOR JAMIE (forthcoming in March 2018). She's also the author of the poetry collection GIRL-KING (University of Akron) and is the recipient of a National Endowment for the Arts fellowship. She earned her BA in literature from Middlebury College and her MFA in poetry from the University of Wisconsin-Madison. She lives in Michigan with her husband, cat, dog, and collection of deerstalker caps. 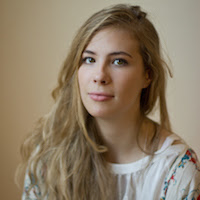 Emily Henry is the author of The Love That Split the World and A Million Junes. She is a full-time writer, proofreader, and donut connoisseur. She studied creative writing at Hope College and the New York Center for Art & Media Studies, and now spends most of her time in Cincinnati, Ohio, and the part of Kentucky just beneath it. She tweets @EmilyHenryWrite.