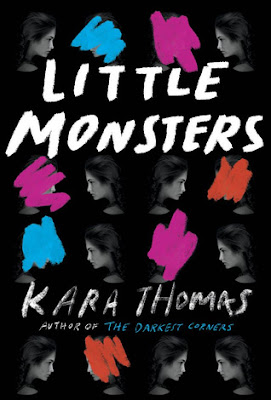 Goodreads Summary: For fans of Pretty Little Liars, Little Monsters is a new psychological thriller, from the author of The Darkest Corners, about appearances versus reality and the power of manipulation amongst teenage girls.

Kacey is the new girl in Broken Falls. When she moved in with her father, she stepped into a brand-new life. A life with a stepbrother, a stepmother, and strangest of all, an adoring younger half sister.

Kacey’s new life is eerily charming compared with the wild highs and lows of the old one she lived with her volatile mother. And everyone is so nice in Broken Falls—she’s even been welcomed into a tight new circle of friends. Bailey and Jade invite her to do everything with them.

Which is why it’s so odd when they start acting distant. And when they don’t invite her to the biggest party of the year, it doesn’t exactly feel like an accident.

But Kacey will never be able to ask, because Bailey never makes it home from that party. Suddenly, Broken Falls doesn’t seem so welcoming after all—especially once everyone starts looking to the new girl for answers.

Kacey is about to learn some very important lessons: Sometimes appearances can be deceiving. Sometimes when you’re the new girl, you shouldn’t trust anyone.

First Thought After Finishing: How in the world…?

A well-written mystery/thriller can be just the right palate cleanser after thick fantasy books. Little Monsters was exactly that, full of dark, twisted characters that made it impossible to look away.

Kacey Young is the new girl in Broken Falls. Escaping a tumultuous relationship with her mother, Kacey moves in with her father and falls into a brand-new family. She also makes new friends, shows promise in art, and has the opportunity to have a job. But when one of her new best friends goes missing, the semblance of normalcy that she’s created starts to unravel. Suddenly she doesn’t know who she can trust, and as she begins to piece together the clues of Bailey’s disappearance, she begins to realize that knowing the truth might be the scariest thing of all.

I’m not sure that any review could do the level of creepiness in this book justice. That is not to say that this book was scary in the conventional sense—though there certainly was a local ghost story that played a role here. No, what was the most frightening here was the portrayal of just how far emotions can go and what they can become warped into. Removed from the story, it seems nearly impossible to be believable, and yet…we all know what the world is like today.

At first, it was hard to connect with Kacey. Despite the fact that she enjoys staying in more than going out, she always seems to be hiding something. Snippets of her past are revealed throughout the book, but the picture never seems quite complete. Still, over time, I felt like I knew her better, and I wanted to reach through the pages and give her a hug. As much as I wanted to know all of the details of Bailey’s disappearance, I wanted to know that she would be okay.

The rest of the characters also have that unique quality of making you want to know them while also making you suspicious. It was hard to know who to trust, and there are definite twists to the story that make it difficult to fit all of the puzzle pieces together until the very end of the book. There is so much more I would like to say, but for the sake of spoilers, I will only leave you with a few words: Intriguing. Demented. Psedu-psychotic. And gripping.

Most Memorable Aspect: The levels of depravity reached by some of the characters. 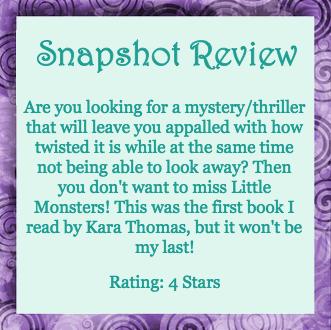 Kara is the author of the critically acclaimed THE DARKEST CORNERS. Her new book, LITTLE MONSTERS, is coming July 25th from Random House/Delacorte. She’s written for everything from her high school newspaper to Warner Brothers Television.