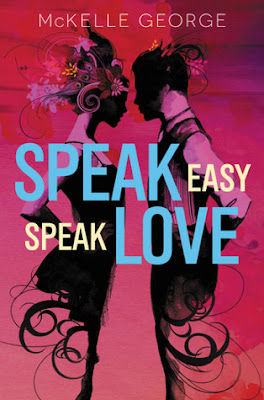 Goodreads Summary: Six teenagers’ lives intertwine during one thrilling summer full of romantic misunderstandings and dangerous deals in this sparkling retelling of Shakespeare’s Much Ado About Nothing.

After she gets kicked out of boarding school, seventeen-year-old Beatrice goes to her uncle’s estate on Long Island. But Hey Nonny Nonny is more than just a rundown old mansion. Beatrice’s cousin, Hero, runs a struggling speakeasy out of the basement—one that might not survive the summer. Along with Prince, a poor young man determined to prove his worth; his brother John, a dark and dangerous agent of the local mob; Benedick, a handsome trust-fund kid trying to become a writer; and Maggie, a beautiful and talented singer; Beatrice and Hero throw all their efforts into planning a massive party to save the speakeasy. Despite all their worries, the summer is beautiful, love is in the air, and Beatrice and Benedick are caught up in a romantic battle of wits that their friends might be quietly orchestrating in the background.

First Thought After Finishing: I love Shakespeare retellings and the excitement of the Roaring Twenties, and this book captured the best of both worlds!

Much Ado About Nothing is one of my favorite Shakespeare plays, so I was very excited to read this historical version. After hearing McKelle George read from the book at her signing, I was sure the book would be fully of snappy dialogue and touching moments, and the story did not disappoint. The adventures of Beatrice and Benedick were transformed in this new setting and made for lively reading.

Beatrice, poor yet feisty, dreams of being a doctor; Benedick, privileged but disenchanted, dreams of being a writer. When their paths first cross thanks to a speakeasy, quick-witted barbs take the place of flirtation as they try to help keep the speakeasy alive. In the midst of bootlegging and hosting parties, the friends can’t help but notice the romantic tension between Beatrice and Benedick and decide to intervene. In this comedy of errors, one can’t help but be entertained.

As much as I love fantasy, sometimes opening a window to the past is a wonderful escape. With this novel, I enjoyed the best of life in the twenties, from the dangerous excitement of the speakeasies to the lazy days of summer spent with friends. The schemes that transpired as well as wanting to know the fate of Hey Nonny Nonny kept me turning pages. Furthermore, the romantic tension wasn’t isolated to Beatrice and Benedick. The story between John and Maggie was one that I found myself drawn to as I hoped for happiness for everyone.

One of my other favorite things about this book was the writing style. Lush and descriptive, with just the right amount of snappy dialogue, this book captured the romanticized aspects of the ‘20s. It was refreshing to read such a unique voice, and I’m eager to see what she writes next!

Most Memorable Aspect: The witty repartee and slow-building tension between Beatrice and Benedick. 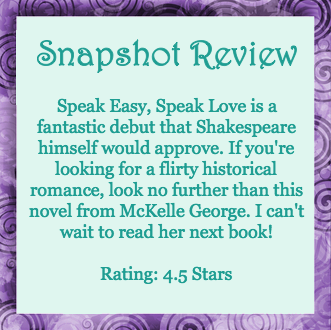