Goodreads Summary: Catarina Agatta is a hacker. She can cripple mainframes and crash through firewalls, but that’s not what makes her special. In Cat’s world, people are implanted with technology to recode their DNA, allowing them to change their bodies in any way they want. And Cat happens to be a gene-hacking genius.

That’s no surprise, since Cat’s father is Dr. Lachlan Agatta, a legendary geneticist who may be the last hope for defeating a plague that has brought humanity to the brink of extinction. But during the outbreak, Lachlan was kidnapped by a shadowy organization called Cartaxus, leaving Cat to survive the last two years on her own.

When a Cartaxus soldier, Cole, arrives with news that her father has been killed, Cat’s instincts tell her it’s just another Cartaxus lie. But Cole also brings a message: before Lachlan died, he managed to create a vaccine, and Cole needs Cat’s help to release it and save the human race.

Now Cat must decide who she can trust: The soldier with secrets of his own? The father who made her promise to hide from Cartaxus at all costs? In a world where nature itself can be rewritten, how much can she even trust herself?

First Thought After Finishing: I’m so glad I have the next book already!

I have always been fascinated by genetics—it’s one of the few aspects of science I actually enjoyed. I was highly intrigued by a book about genetic coding, and This Mortal Coil did not disappoint!

In a post-apocalyptic world ravaged by a virus, living outside security bunkers is dangerous. But that’s exactly what Cat Agatta, daughter of the foremost genetic coder, has been doing. She’s managed to stay alive on her own, and she would have kept surviving. But when a stranger shows up to inform her that her father has died, her world begins unraveling. Soon she is drawn into a mission to complete his work on a vaccine that could literally save the world. Despite the danger, Cat agrees. She never imagined that she’d barely scratched the surface on what coding could do...

Computer coding is not my forte, but I’ve dabbled in it here and there. Reading about people who can code endlessly, with a thought, made me want to dive into it again. But this book is so much more than coding. It’s a glimpse into what our future could be if technology keeps progressing, and that’s both scary and exciting. Apps and virtual reality abound—but not for Cat. She has hypergenesis, an allergy to most technology, and this made her immediately relatable. Although she had a few minor upgrades, she mostly had to rely on her own mind. Cat is brilliant and fierce in her own right, and for teens reading this, I love that they have a character like this.

The world was complex, with many layers to government agencies and the people who work there. As more characters were introduced and I got to know them, they became a group of friends I would want to be part of. With life itself hanging in the balance, emotional tensions ran high at times, but that helped to forge bonds quickly. Romance certainly does play a part, but it is not as straightforward as it might seem. Honestly, there is so much that I could say about the characters and their gradual development, but why spoil the surprise? Some aspects of books just need to be experienced.

As much as this book can be considered science fiction, it also has elements of a thriller. With high stakes and constant twists, it was an engrossing, fast read. I flew through the pages, eager for the next confirmation of suspicions or surprising revelation. This book does have some similarities to other recent sci-fi novels, but the coding continues to set it apart. I’ll be diving into the sequel right away!

Most Memorable Aspect: The coding and intrigue. 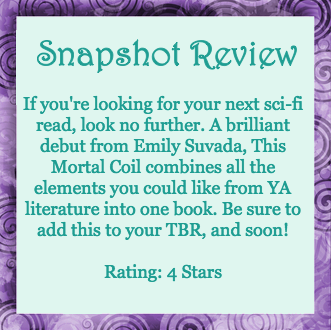 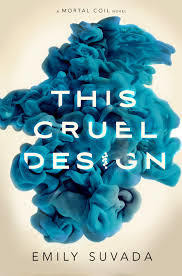 
Goodreads Summary (May Contain Spoilers for Book 1): Cat thought the Hydra epidemic was over, but when new cases pop up, Cat must team up with an enemy to fix the vaccine before the virus spirals out of control in this thrilling sequel to This Mortal Coil, which New York Times bestselling author Amie Kaufman says “redefines ‘unputdownable.’”

The nightmare of the outbreak is finally over, but Cat’s fight has only just begun.

Exhausted, wounded, and reeling from revelations that have shaken her to her core, Cat is at a breaking point. Camped in the woods with Cole and Leoben, she’s working day and night, desperate to find a way to stop Lachlan’s plan to reprogram humanity. But she’s failing—Cat can’t even control her newly regrown panel, and try as she might to ignore them, she keeps seeing glitching visions from her past everywhere she turns.

When news arrives that the Hydra virus might not be as dead as they’d thought, the group is pushed into an uneasy alliance with Cartaxus to hunt down Lachlan and fix the vaccine. Their search takes them to Entropia, a city of genehackers hidden deep in the desert that could also hold the answers about Cat’s past that she’s been searching for.

But when confronted with lies and betrayals, Cat is forced to question everything she knows and everyone she trusts. And while Lachlan is always two steps ahead, the biggest threat to Cat may be the secrets buried in her own mind.

Some books take you on an emotional journey; some books raise philosophical questions; and some books keep you frantically turning pages to see what happens next. This Cruel Design does all three.

This Cruel Design starts just where This Mortal Coil ended. Cat’s work fighting the Hydra vaccine and saving the world is nowhere near done, but at least she does not have to do it alone. Armed with new knowledge, she goes in search of the one person who can help her fix the problem—but is she prepared to find him?

Second books in a trilogy can have a tendency to be slow and feel unnecessary, but that is certainly not the case here. The pacing was on par with the first book, keeping me engaged page after page. And Emily Suvada has no shortage of surprises. The fate of the world once again hangs in the balance, which would create enough tension on its own, but Suvada skillfully weaves in past memories and revelations that serve to up the ante.

We meet new characters in this installment, and once again, they are fascinating and complex. Knowing who to trust is never easy in this world, and the shifting loyalties and heroism only adds to the air of mystery pervading this book. There were so many other aspects that I appreciated—subjects like sexuality and gender were explored in a way that felt authentic, and the moral/ethical dilemmas presented here by technology are good food for thought.

Writing a spoiler-free review—especially for a second book, and one like this—is nearly impossible. As with the first book, I want to say so much about the characters, but why deprive you of experiencing Cat’s emotions and discoveries firsthand? This is definitely a book that should be on TBR piles, so go forth and read it!

Most Memorable Aspect: The roller coaster of plot and emotions. 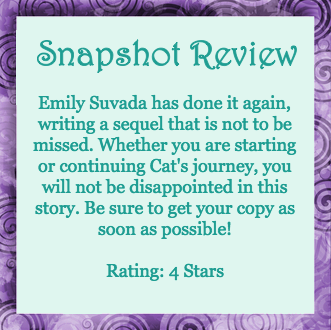 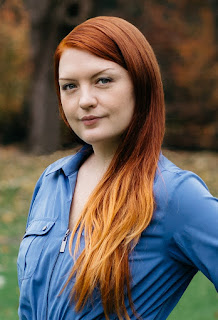 Emily Suvada was born and raised in Australia, where she went on to study mathematics and astrophysics. She previously worked as a data scientist, and still spends hours writing algorithms to perform tasks which would only take minutes to complete on her own. When not writing, she can be found hiking, cycling, and conducting chemistry experiments in her kitchen. She currently lives in Portland, OR, with her husband.