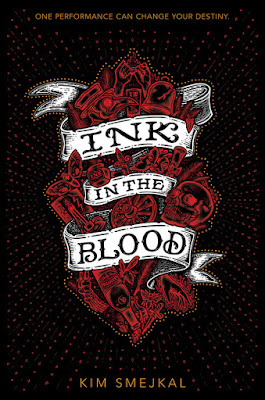 Goodreads Summary: A lush, dark YA fantasy debut that weaves together tattoo magic, faith, and eccentric theater in a world where lies are currency and ink is a weapon, perfect for fans of Leigh Bardugo and Kendare Blake.

Celia Sand and her best friend, Anya Burtoni, are inklings for the esteemed religion of Profeta. Using magic, they tattoo followers with beautiful images that represent the Divine’s will and guide the actions of the recipients. It’s considered a noble calling, but ten years into their servitude Celia and Anya know the truth: Profeta is built on lies, the tattooed orders strip away freedom, and the revered temple is actually a brutal, torturous prison.

Their opportunity to escape arrives with the Rabble Mob, a traveling theater troupe. Using their inkling abilities for performance instead of propaganda, Celia and Anya are content for the first time . . . until they realize who followed them. The Divine they never believed in is very real, very angry, and determined to use Celia, Anya, and the Rabble Mob’s now-infamous stage to spread her deceitful influence even further.

To protect their new family from the wrath of a malicious deity and the zealots who work in her name, Celia and Anya must unmask the biggest lie of all—Profeta itself.

First Thought After Finishing: *insert stammering then* Well then!

A fantasy book with tatoo magic? Yes please! Add in a traveling theater troupe, a hint of romance, and a dash or religious debate, and I was hooked.

Celia is an Inkling—a child specially chosen by the Divine to share her will and messages through tattoos. From the time she was six, she knew what the rest of her life would be. She and her best friend, Anya, passed every test and followed every Divine bidding. Only they don’t quite believe in the Divine, despite growing up in the temple. When an opportunity to escape presents itself, Celia and Anya know they must take it. But life outside the temple might prove to be just as dangerous as life on the inside. Celia and Anya soon discover that they must give the performance of a lifetime if they have any hope of staying alive—or changing the world.

Most books about revolution show the protagonist trying to dethrone an evil despot, but Ink in the Blood takes it one step further. Instead of a corrupt ruler, an entire religion has become corrupt, but it will take extraordinary means to expose the corruption and pave a pathway forward. I am fascinated by all things religion, particularly the similarities and differences between denominations, so I enjoyed this twist on YA fantasy. The religious system comes complete with its own myths and lore, which made the world feel that much more possible and real.

It’s rare to see a book that highlights friends as soulmates, but this story does just that. The bond between Celia and Anya was unbreakable, and with Galentine’s day fast approaching, I couldn’t help but love this aspect of the story. Celia and Anya may have their flaws—some real, some created by the powers that be—but their devotion to each other was never in question, even in the darkest times.

The side characters, particularly those of the Rabble Mob, are no less important. One couldn’t help but love the little children who looked to Celia as a pseudo-mother. But the real stars of the show were Kitty Kay and the Plague Doctor. Both of these characters are shrouded in mystery, particularly the Plague Doctor. Over time, Kitty Kay becomes the mother that the Inklings never have, but the Plague Doctor remains an enigma to understand. The chemistry between him and Celia sizzled off the page, and though their romance was not the main facet of the story, it made for a delightful diversion in the midst of so much tension.

I will admit that it took some time for me to get into this story. As much as I support queer representation, within the first fifty pages of this book, the pains to show inclusivity took me out of the story rather than being integrated naturally. This lessened as the book went on, however, and once the story picked up, it was nearly impossible to put down. The last fifty pages definitely made up for the first fifty, as twist after twist kept me guessing until the end. I thought that this was a standalone, but there will be a sequel forthcoming. Although many loose ends are tied up, I look forward to seeing how Celia’s story continues in the next book! Ink in the Blood is a debut that is not to be missed! 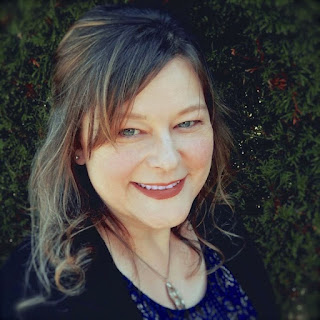 Kim Smejkal lives with her family on muse-satiating Vancouver Island, which means she’s often lost in the woods or wandering a beach. She writes dark fantasy for young adults and not-so-young adults, always with a touch of magic. Her debut novel, INK IN THE BLOOD, will release from HMH in early 2020, with a sequel to follow in 2021. She is represented by Daniel Lazar of Writers House.