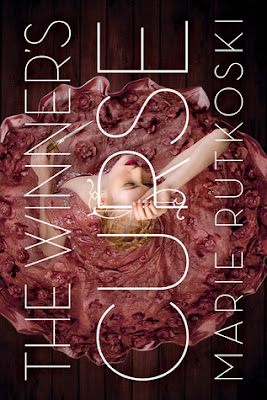 Goodreads Summary: As a general’s daughter in a vast empire that revels in war and enslaves those it conquers, seventeen-year-old Kestrel has two choices: she can join the military or get married. But Kestrel has other intentions.

One day, she is startled to find a kindred spirit in a young slave up for auction. Arin’s eyes seem to defy everything and everyone. Following her instinct, Kestrel buys him—with unexpected consequences. It’s not long before she has to hide her growing love for Arin.

But he, too, has a secret, and Kestrel quickly learns that the price she paid for a fellow human is much higher than she ever could have imagined.

Set in a richly imagined new world, The Winner’s Curse by Marie Rutkoski is a story of deadly games where everything is at stake, and the gamble is whether you will keep your head or lose your heart.

First Thoughts After Finishing: I should have read this trilogy years ago!

A few years ago, I took a break from reading YA books. During that time, The Winner’s Curse was published. As it turns out, I missed out on some good books in those years. However, with Marie Rutkoski’s new book set in the same world, as well as the love for this trilogy, I knew that I needed to catch up on my reading, and I am so glad I did!

As the daughter of the Valorian general, Kestrel has two choices: Join the military or be married. Not ready to settle for either fate, she spends her time practicing her music or visiting her friend Jess. When the friends are out together and happen through the Herrani slave market, Kestrel finds herself making a purchase she never anticipated—a young male slave named Arin—for an exorbitant sum. Once Arin begins working at Kestrel’s house, she cannot seem to avoid him. He becomes her escort, her shadow of sorts—and yet he is a Herrani, and she a Valorian. Nothing could happen between them. But the winds of unrest are gathering, bringing change on the breeze, and neither Kestrel nor Arin could be prepared for what will happen.

This book has elements of several genres—fantasy, historical fiction, and dystopian. The world is complete with carriages, fancy dresses, and land battles and class warfare that left Herrani enslaved to the Valorians. Into this complex, tumultuous world are placed Kestrel and Arin, who must navigate a nearly-impossible situation. Kestrel quickly became one of my favorite females in fantasy. She has to train as a fighter, but unlike most females, her fiercest weapon is her mind. Kestrel is constantly strategizing, whether it is at the game Bite and Sting to outwit her opponents or devising military maneuvers for conquering lands or saving her own. Add to that her brilliant talent for music, and I was sold.

Arin was harder to get to know, despite the third-person point of view that allowed us to see his actions. It was difficult to determine my feelings about him until partway through the book, and even then the constantly-shifting events and loyalties made me question those feelings more than once. However, there was no denying the romantic tension between Arin and Kestrel—it practically radiated off the page into something palpable. The tender moments they shared were certainly swoon-worthy, and I cannot wait to see what will develop between them in the next book.

This book was a quick read despite all of the events taking place in what seemed like a few short pages. The writing was lyric and beautiful, and the cast of supporting characters brought vibrancy and life to the story. The story may have been written years ago, but it can still very much stand beside the fantasy stories of today in all aspects. If you have not started this trilogy, add it to your TBR today!

Most Memorable Aspect: Kestrel’s wit and cunning, and certain musical and pier scenes. 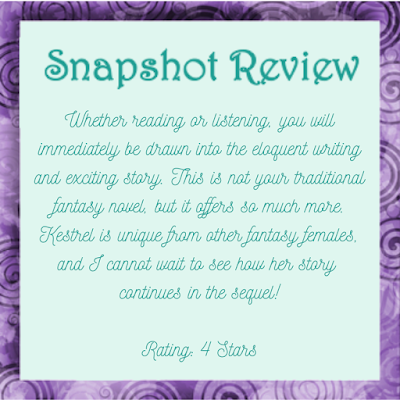