Blog Tour & Book Sketch: All We Could Have Been by T.E. Carter 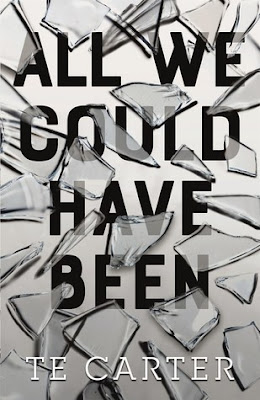 ALL WE COULD HAVE BEEN
By: T.E. Carter
Published By: Feiwel & Friends
Release Date: April 23, 2019
Series: None
Pages: 304
Genre: Contemporary
Reading Level: Young Adult
Source: Publisher
Buy the Book: Amazon

Goodreads Summary: Five years ago, Lexie walked home from school after her older brother failed to pick her up. When she entered her house, her brother sat calmly, waiting for the police to come arrest him for the heinous crime he had just committed.

Treated like a criminal herself, Lexie now moves from school to school hiding who she is—who she's related to. She struggles with loving her brother, the PTSD she now suffers from, and wanting to just live a normal life. But how can she be normal when she can’t even figure out how to just live?

This is a powerful look at the assumptions we make about people. Lexie's emotional journey to separate her brother's horrific act from herself is stunning and heartbreaking. This is Lexie’s story and journey—not her brother's—and it will stay with you long after you turn the last page.

First Thought After Finishing: What a journey!

I was intrigued by the synopsis of this book--the sister of a convicted murderer seemed like such an interesting perspective. This book was an emotional journey, to be sure, but there was also an examination of the nature of people and whether or not change is possible.

Ever since her brother committed and confessed to murder, Lexi's life has never been the same. She was never particularly popular at school, but now school is a battlefield, and she is always the victim. Lexi has spent the past five years moving every year, praying that nobody would find out, but she has yet to survive a school year. But this year will be different, she promises herself. She will keep her head down for 162 days, nobody will find out about Scott, and she'll graduate and be done with it. Only not letting people in is much harder than it sounds, especially when the possibility of friends is so tempting. But what will she do if they find out?

This book delves into the age-old question: Can people truly be loners? Lexi wants to keep to herself, but when she meets Ryan and Marcus, she can't help but be drawn to them, although for different reasons. Ryan's enthusiasm and general kindness make him impossible to ignore, and when he introduces Lexi to his friends in the drama club, she can't help but be caught up in their infections energy. With Marcus, she can't help but want to know him better, and to want him to know her, despite the warnings from her aunt. And although all of these characters may seem straightforward, there is more to each of them than meets the eye.

Lexi has been battling a fair amount of mental health issues ever since her brother's arrest. She has a therapist and has internalized many of his sayings, but that hasn't solved any major problems yet. The depth of Lexi's pain goes beyond what might be expected. But with the help of Marcus, she starts to realize that perhaps she wants more out of life. In some ways, Marcus is a bit of a crutch for her, but I think everyone needs that at some point. The themes of the book certainly made me think--is it human nature to be selfish? How fair is it to expect people to change? How does one keep trying for genuine connection in the face of so much hurt? These questions may not be definitely answered in the book, but I think they have the possibility to make the reader reflect on their own emotional lives.

To be honest, a few of the characters--especially Ryan--disappointed me. I wanted more for him; I wanted to see something more hopeful. In other ways, I would have liked to see more depth and development from Lexi. I felt a sense of disconnectedness through most of the book, and although that reflects her current emotional state, there was an opportunity for so much more depth of feeling. Still, I would be open to reading more from this author in the future to see what other emotional journeys there are.

Most Memorable Aspect: The premise is unlike anything I've seen before. 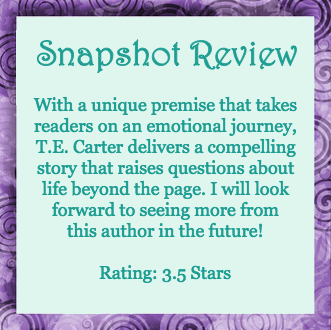 TE Carter was born in New England and has lived in New England for pretty much her entire life. Throughout her career, she’s done a lot of things, although her pas-sion has always been writing. When she’s not writing, she can generally be found reading classic literature, playing Xbox, organizing her comic collection, or binge watching baking competitions. She continues to live in New England with her hus-band and their two cats.