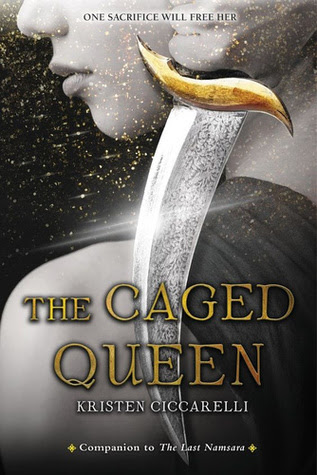 Once there were two sisters born with a bond so strong that it forged them together forever. Roa and Essie called it the hum. It was a magic they cherished—until the day a terrible accident took Essie’s life and trapped her soul in this world.

Dax—the heir to Firgaard’s throne—was responsible for the accident. Roa swore to hate him forever. But eight years later he returned, begging for her help. He was determined to dethrone his cruel father, under whose oppressive reign Roa’s people had suffered.

Roa made him a deal: she’d give him the army he needed if he made her queen. Only as queen could she save her people from Firgaard’s rule.

Then a chance arises to right every wrong—an opportunity for Roa to rid herself of this enemy king and rescue her beloved sister. During the Relinquishing, when the spirits of the dead are said to return, Roa discovers she can reclaim her sister for good.

All she has to do is kill the king.

I really enjoyed The Last Namsara, and I was eager to dive into The Caged Queen. Although this is technically a companion novel and they can be read out of order, I would definitely recommend reading them in publication order. The following review will be spoiler-free for The Caged Queen, but it contains spoilers for The Last Namsara.

Dax and Roa are the new king and queen of Firgaard, but their rule is far from easy. Roa is an outsider, a Scrublander from the House of Sky, desperate to save her people from starvation. Dax is a new ruler, trying to help his childhood friend while doing good for his land as well. But Roa cannot let go of a tragic accident in the past, instead clinging to her sister’s spirit and chasing the hope that she can somehow bring Essie back. Schemes and secrets abound on all sides in Dax and Roa’s unstable kingdom, threatening to tear both the kingdom and the couple apart. With Asha and Torwin gone, Dax is on his own to save what he cares about most. Can he unravel the plots against him before it’s too late?

The Last Namsara was full of action, but this book was much more psychological, which I found fascinating. Roa made no secrets of her emotions toward Dax and his kingdom, and she quickly found herself embroiled in plots to destabilize his rule. Dax, on the other hand, was an enigma through most of the book, keeping me guessing where his loyalties and his heart truly were. Although Dax generally came across as weak in the first book, he really found his own strength in this story. By the end of the book, Dax will become one of your favorite characters.

One of the best parts of the first book was the mythology and lore included, and that was back in this story as well. Short stories from the world were interspersed with the actual storyline. Along with this, there were a fair number of flashbacks to Dax and Roa’s childhood, which really rounded them out as characters. Roa especially needed this, because she was far harder to like. Still, the character growth and development were wonderful throughout the entire book.

Overall, it was enjoyable to read a story that was both a sequel and a companion novel. I appreciate the fact that we got more of the world from different perspectives, and it allowed me to like the world even more. The tension between the characters in an enemies-to-lovers romance, the uncertainty from unreliable narrators, and dangerous stakes made this book a page-turner despite the slow pace. After this, I can’t wait to see what Ciccarelli has in store for the final installment of the trilogy!

Most Memorable Aspect: The short stories within the story, and the royal schemes. 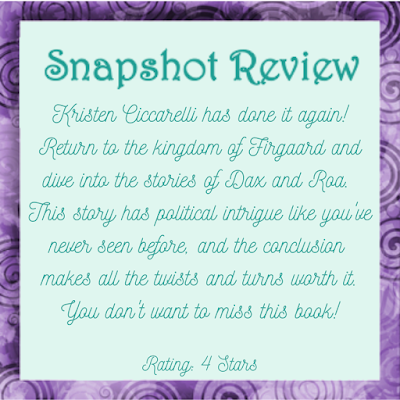