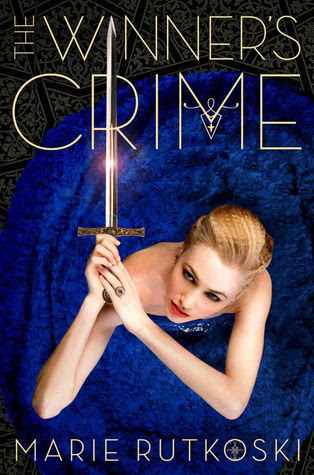 Book two of the dazzling Winner's Trilogy is a fight to the death as Kestrel risks betrayal of country for love.

The engagement of Lady Kestrel to Valoria’s crown prince means one celebration after another. But to Kestrel it means living in a cage of her own making. As the wedding approaches, she aches to tell Arin the truth about her engagement... if she could only trust him. Yet can she even trust herself? For—unknown to Arin—Kestrel is becoming a skilled practitioner of deceit: an anonymous spy passing information to Herran, and close to uncovering a shocking secret.

As Arin enlists dangerous allies in the struggle to keep his country’s freedom, he can’t fight the suspicion that Kestrel knows more than she shows. In the end, it might not be a dagger in the dark that cuts him open, but the truth. And when that happens, Kestrel and Arin learn just how much their crimes will cost them.

First Thought After Finishing: I’m so glad I don’t have to wait another year for the final book of this trilogy!

Everything that made me love the story in The Winner’s Curse is back in full force in The Winner’s Curse. This book raises the stakes with more trials and tribulations for Kestrel and Arin, more (potentially deadly) scheming, and more of their fatal attraction. There was no second-book slump here!

In a desperate attempt to save the Herrani people from certain death at the hands of the Valorian general, Kestrel made a bargain with the emperor of Valoria: She would marry his son the prince and one day become empress. To prepare for her fate, Kestrel moves to the mainland palace, where she is pulled into the emperor’s schemes and thrown together with her betrothed. But as always, Kestrel has schemes of her own. With the truth of her love buried deep in her heart, Kestrel continues to plot for a better future. Meanwhile, Arin has to find a way to protect his people from the inevitable war that was only delayed, no matter how far he has to travel or how much he has to sacrifice. Will their paths bring them back together, or will they be torn apart forever?

Most fantasy books have kick-butt heroines fighting in armor, but The Winner’s Curse diverged from this norm. In this book as well, Kestrel is every bit a warrior with her intelligence, and she does so while in a ball gown. Everything I loved about Kestrel in the first book made me love her in this one as well, especially her inner strength and musical talent. As a pawn in the emperor’s schemes, Kestrel is forced to make brutal choices that weigh heavily on her conscience and only serve to drive a further wedge between her and Arin. The emperor would make Machiavelli proud, but his son is a different man entirely. Verex befriends Kestrel, though he has no real desire to marry her. I was quite thankful that this did not become a love triangle.

All budding romance took a backseat in this book, though Kestrel and Arin’s feelings are certainly forefront in both of their minds. Arin was rather stubborn in his determination to erase his feelings, even going so far as to make questionable decisions in foreign countries. Still, despite all of the struggles, there was a faint thread of hope. Every time that Arin and Kestrel were brought together, no matter how dire the circumstances, the undercurrent of romantic tension was palpable.

This book introduced new, interesting characters, especially in Arin’s travels, as well as raised the stakes for all political and royal parties. I can’t wait to see how everything comes together in the final book of this trilogy. There is so much more I could say about this book, but really, you just need to read it for yourself.

If you haven’t picked up The Winner’s Curse trilogy by Marie Rutkoski, what are you waiting for? This is one trilogy you won’t want to miss!

Most Memorable Aspect: All of the political scheming by Kestrel. 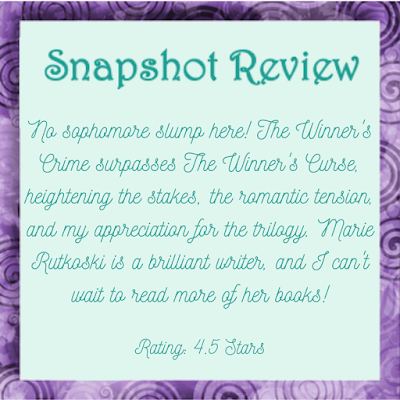