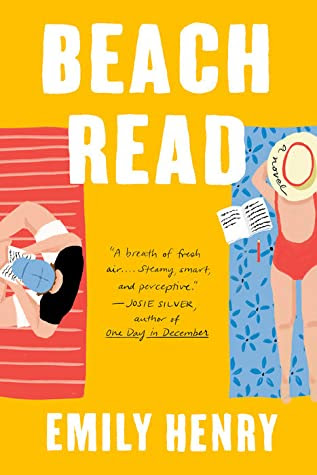 Goodreads Summary: A romance writer who no longer believes in love and a literary writer stuck in a rut engage in a summer-long challenge that may just upend everything they believe about happily ever afters.

Augustus Everett is an acclaimed author of literary fiction. January Andrews writes bestselling romance. When she pens a happily ever after, he kills off his entire cast.

In fact, the only thing they have in common is that for the next three months, they're living in neighboring beach houses, broke, and bogged down with writer's block.

Until, one hazy evening, one thing leads to another and they strike a deal designed to force them out of their creative ruts: Augustus will spend the summer writing something happy, and January will pen the next Great American Novel. She'll take him on field trips worthy of any rom-com montage, and he'll take her to interview surviving members of a backwoods death cult (obviously). Everyone will finish a book and no one will fall in love. Really.

First Thought After Finishing: I wish this book had more pages!

I love reading contemporary romances in the summer, and when I started seeing Beach Read all over Instagram, I knew this had to be on my TBR this summer. So many people loved this book, and after reading it, I can see why. This isn’t a lighthearted, cute read, but it was absolutely the perfect book for the last week of summer.

January Andrews loves romance, loves love, and loves happily ever afters. At least, she did. That was all before. Before she realized that her carefully cultivated life had been a lie. Now she wants nothing to do with happy endings. There’s only one problem—she’s a romance writer, her next book is due, and she’s broke. So she’s going to spend the summer in her father’s beach house overcoming her writer’s block. But she never expected that her college nemesis-slash-crush, Augustus Everett, would be living in the house next door. After a disastrous book club event, they make a deal: They’ll trade genres. January will write the next great American novel, and Gus will exchange killing the cast for pairing them up instead. But this is just writing. Everything will be purely professional. Nothing could possibly go wrong…right?

As an aspiring author, I really enjoy reading books with authors as characters. It’s like doing research while also having a fantastic story—the best of both worlds. This book gave me not one author but two, which made it twice as good. I loved seeing both of these authors’ perspectives, their different methods of researching and writing, and their motives behind their stories. It was like a story within a story, and I was just as intrigued by the books January and Gus were writing (please, someone actually write them!) as I was by the romance developing between January and Gus. After finishing this book, I wanted to dive back into my own story and work through my own writer’s block!

Both January and Gus are vivid characters, and both of them made me want to reach through the pages to give them a hug. January’s disillusionment with happy endings, and Gus’s realistic-bordering-on-pessimistic life attitude were both very relatable. To me, romance novels are always better when there is a clear reason for the characters to be together beyond physical attraction, and Gus and January definitely have that. They both have their baggage, but it is this baggage and a touch of “opposites attract” that helped to bring these two together. As Gus’s backstory was revealed, it became more and more clear why January and Gus just belonged together. Add to this palpable chemistry, sizzling banter, and sweet (or sexy) moments between the characters, and I was more than a little bit swoony for their romance. I certainly wouldn’t mind having a Gus of my own.

The setting and small-town vibes play an important role in this book. I could almost imagine myself on the Michigan coast, sitting on a porch with a cup of coffee and looking out on the waves. I also loved the other characters sprinkled throughout the story—Pete, Maggie, and Shadi. There was wonderful friendship, and despite all of the issues with biological family, Pete and Maggie definitely filled that void. I also enjoyed reading the texts, notes, and letters that were included throughout the story. The letters especially added so much, and that ended up being one of the most touching scenes in the book.

Beach Read may not have been an upbeat lighthearted read, but it ended up being so much better. It was the perfect summer read that I wanted to last far longer than it did. I hope that Emily Henry writes more books like this, because every single one will go on my TBR. If you are looking for a romance with great depth to the story and a wide emotional range, look no further than Beach Read.

Most Memorable Aspect: The story-within-a-story aspect, the setting, and Gus. 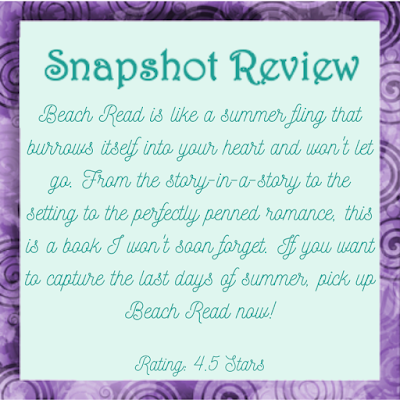